The cost of living in the United Kingdom has been steadily increasing for years; however salaries have not been increasing at a corresponding rate, leaving many individuals and families struggling to make ends meet.

There has been an increase in people using food banks , those experiencing in work poverty, homelessness etc. According to many, the introduction of Universal Credit, in place of the previous benefits system has exacerbated many of these issues.

The Living Wage Foundation believes that all employees should be earning a salary that allows them to comfortably live in today’s economy.

The rate has increased by 25p to £9 outside London and by 35p an hour to £10.55 in the capital because of higher transport costs, private rents and council tax.

As highlighted in the table below, a minimum wage employee over the age of 25 is earning roughly 20% less than the real living wage – this figure rises to a staggering 42% difference for those living and working in London. 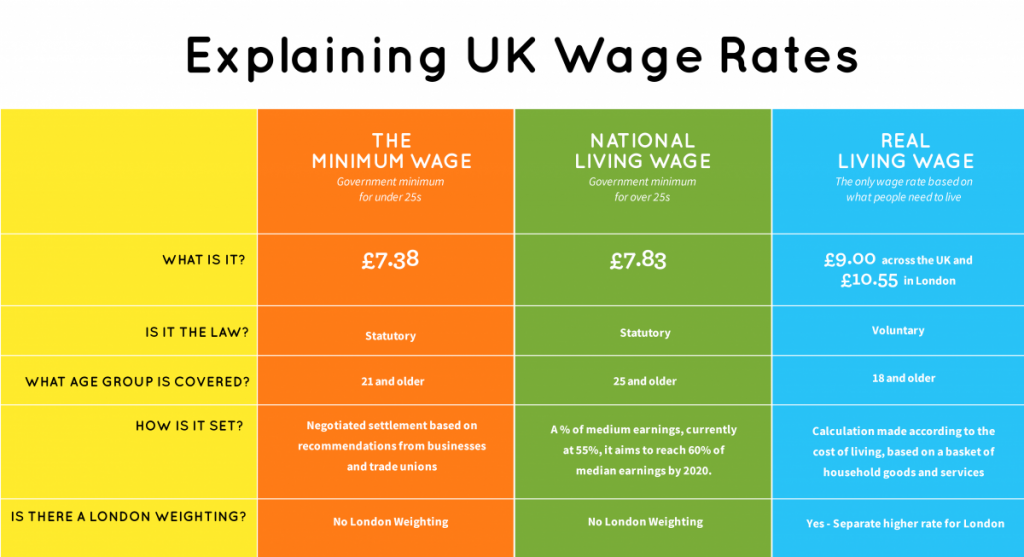 (Table from The Living Wage Foundation)

At present, there are 4,700 businesses in the UK that pay the real Living Wage. This is not enough.

“Responsible businesses know that the Government minimum is not enough to live on, and today’s new living wage rates will provide a boost for thousands of workers throughout the UK.

“Employers that pay the real living wage enable their workers to live a life of dignity, supporting them to pay off debts and meet the pressures of rising bills.

“We want to see local councils, universities, football clubs, bus companies and the other major public and private sector employers in every city commit to become real living wage employers.”

Many businesses that are offering the Real Living Wage are professional bodies, for example, Association of Accounting Technicians, Royal College of Nursing, Law Society of Scotland, CIPD and Public Relations and Communications Association are all proud to offer their employees a salary that they can live on.

In light of the Living Wage increase, Adam Williamson, Head of Professional Standards at AAT, said:

“The £9 Living Wage is set independently and calculated annually, according to the basic cost of living using the UK’s ‘Minimum Income Standard’. While those employers, including AAT, who have Living Wage Foundation accreditation are going above and beyond their legal requirements by paying the Living Wage, it sets a strong tone – not only to employees but to customers, suppliers and other stakeholders.”

He also goes on to explain that with one-third of AAT’s student population being under the age of 25 and with over 10,000 studying apprenticeship schemes, AAT support the National Union of Students’ (NUS) description of apprenticeship wages as ‘exploitative’.

“All businesses, large and small, should consider signing up to the Living Wage to help eradicate low pay and act to the benefit of students, apprentices, small business owners, skilled workers and many other employees.”

“Becoming a Living Wage employer is about much more than just paying higher wages. What our pilot has shown is that if we support HR professionals, they can become real change agents in their organisations. The Living Wage becomes a catalyst for driving positive change in a number of areas related to the Good Work agenda. This is a win-win for everyone: employees who have more meaningful jobs, employers who increase their organisation’s productivity and UK society at large as this supports other big agendas, such as social mobility and skills utilisation.”